Who doesn’t like apples? And who doesn’t like eclairs? Nobody, of course! From my Introduction to Philosophy classes in college I deduce that everyone must also like Apple Eclairs. Boom, your mind is blown and your mouth is watering.

Thanksgiving is right around the corner and Halloween is at the corner we just passed. I can’t believe what time of year it is! This past year has gone by so quickly. I was gone this past year in Ecuador and never got to meet my nephew, who was born only several weeks after I left for work. To be back and see little Judah walking has been pretty incredible. He’s a cutie and just had his birthday party yesterday.

It was a blast to watch him eat his cake. He made such a mess! His older siblings helped him blow out the candles and lick the decorations clean from off his cake -of course they were helpful for sweets!

For the birthday party I wanted to make something fall-esque so I made Apple Eclairs, something of an invention when I couldn’t make what I really wanted to make. I used a basic pate a choux. I had tried making this before in Puno, Peru but it’s at 12,000 feet above sea level so it was almost instantly a fail. So, for the first time making pate a choux at an acceptable altitude I was stoked watching them rise in the oven. I’m telling you, baking is magic. 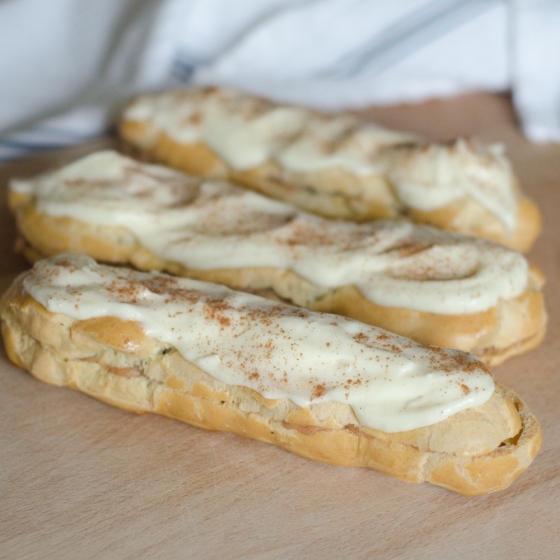 Pate a Choux
Julia Childs says that pate a choux is an easy staple that every cook ought to have in their kitchen repertoire. I agree, it is easy –once you understand the ground rules- and there’s a lot you can do with pate a choux, which makes it sure to surprise every time you serve it. I did not use her recipe exactly, but when I read it afterward I wish that I had.

Boil water in a 1 1/2 quart heavy bottom pan along with butter, sugar and salt. Boil until butter is melted. While that is going on measure out the flour.Remove from heat and add all the flour to the water at once and beat immediately and vigorously for several seconds until it is well blended.

Bring the pan back to the burner and place on moderately high heat and beat for 1-2 minutes until the mixture leaves the sides of the pans and does not stick to the spoon and a film appears on the bottom of the pan.

Remove from heat and place in a mixing bowl. Spread out flat and allow to cool for about 5 minutes, but not much longer. If you don’t you will end up cooking your eggs then and there in the dough. Once slightly cooled break in one egg and stir until well incorporated into the dough. Do this one egg at a time; however, for the last egg add it a little at a time as needed to make sure the dough doesn’t become too runny. It should resemble heavy mayonnaise.

Prepare your cookie sheets by lining them with parchment paper and set aside. Start to put the pate a choux in your piping bag and put on piping tip. If you do not have a piping bag you can make one out of parchment paper. Fill piping bag and start to pipe your eclairs onto the baking sheets. I made mine about 1 1/2 inch wide and about 6-7 inches long each. Make sure to space by about 2 or more inches as they will puff up quite a bit. Dip pastry brush in beaten egg with a bit of water and smooth over tops of the eclairs. Place the sheets side-by-side in the oven in the upper third portion of your oven. Bake for 20 minutes. They are done when they are doubled in size and are nice and golden and crusty to the touch. Remove from the oven and working quickly pierce the sides with a fork and place back in the oven and let cool with the door slightly open for 10 minutes. Cool the eclairs on cooling racks.

I used McIntosh apples, which I just think are great baking apples and they turn into mush so easily, which is needed for this recipe. Peel and core the apples then dice them up and throw them in the sauce pan over medium high heat. Throw in the sugar, butter and cinnamon (I’m not going to lie I didn’t measure the cinnamon I put in, I just threw in what I thought looked and smelled right, adjust as you see fit) and allow to sautee for a few minutes. Turn heat down and let the apple simmer down until they are soft enough to mash. If you like to keep a bit of chunk in your apples at this point that’s fine. Mash with a fork, then add 2 tbsp flour and 1 cup of water and allow to cook for 5 minutes until things are nice and goopy. Remove from heat and allow to cool.

Cream together cream cheese, butter and powdered sugar until fluffy and then stir in vanilla.

Once the eclairs have cooled used a bread knife to cut them lengthwise in half. I placed that all on the countertop open and spooned out the apple filling into each evenly between them all. At then end if there was left over apple filling I split it evenly between them topping them off. Place the tops back on the eclairs and frost with the cream cheese frosting. You’ll have extra frosting probably, so find some graham crackers to snack on too! You can powder the tops of the eclairs with a touch of cinnamon to finish up.

What other kinds of things can you think of to make with pate a choux? Cream puffs is an obvious choice, but what else?!

Well, what do you think? Leave a comment! Cancel reply 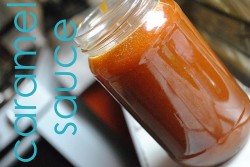 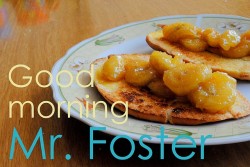